Panel of experts live at the London Law Expo 2015 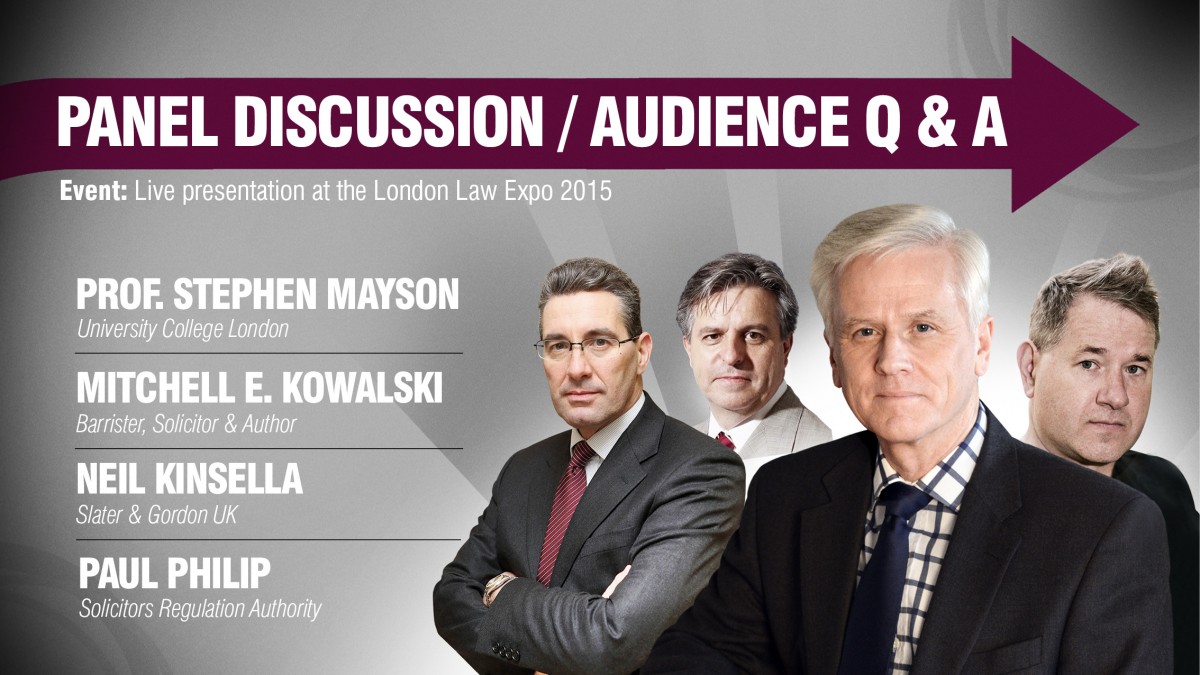 Missed the London Law Expo 2015? Listen to a recording of this Main Stage panel discussion &  open mic session simply by clicking the play button above.

Presentation: A group of high profile experts took to the Main Stage for a panel discussion & open mic session where audience members were offered an opportunity to question the panel & Prof. Stephen Mayson.

Mitchell Kowalski was recognized as a Fastcase 50 Global Legal Innovator in 2012, and he is the author of the critically acclaimed American Bar Association best-seller, Avoiding Extinction: Reimagining Legal Services for the 21st Century. The ABA will also be publishing his forthcoming book, The Great Legal Reformation, in late 2015. As a former in-house counsel, and partner at one of the world’s largest international law firms, Mitch provides a seasoned and unique perspective on the redesign of legal services delivery – one that is sought-after around the World. As a visiting professor at the University of Calgary Law School, he researches/teaches innovation in the global legal services market.

Paul took up his post as Chief Executive of the SRA on 1 February 2014. He was previously the Deputy Chief Executive and Chief Operating Officer of the General Medical Council (GMC) where he was responsible for leading all corporate work programmes, as well as delivering all the organisation’s core regulatory work. Prior to becoming the Chief Operating Officer at the GMC Paul led the GMC’s medical ethics and disciplinary functions reforming fundamentally the way in which the organisation conducts its business in these areas.

Paul has previously held senior roles in both the Legal Services Commission and the NHS.

Neil is Head of General Law at Slater and Gordon and is responsible for developing the firm’s strategic approach to developing and delivering world class affordable legal services across a the firm’s range of non personal injury practice groups.

He is a leading and respected member of the legal community and has driven the firm into a new era of working, challenging the more traditional work methods by embracing technological advances to ensure that the firms’ clients receive outstanding service in the ways which suit them best.

Neil is regularly asked to comment in the media, in government forums and in working groups on many topics, especially those surrounding the future of the legal profession and industry issues such as the benefits of Alternative Business Structures. He is at the forefront of developing new ways of providing affordable, accessible legal services particularly with the government’s aims of reducing the availability of legal aid.

His forward thinking was pivotal in the acquisition of ‘Claims Direct’, changing the way in which the brand was perceived, turning it into the ethical and reputable market leader it is today.