PANEL: The Rise of the AI Chatbots 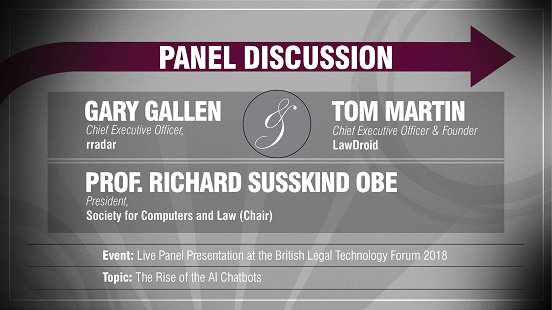 Presentation Title: ‘PANEL: The Rise of the AI Chatbots’

Gary Gallen is one of the UK’s leading corporate defence lawyers, with over 25 years’ experience. He is frequently engaged on highly sensitive and often public cases defending professionals facing criminal prosecution and regulatory investigation the length and breadth of the UK.

Gary combines a passion for the law with a compassion for those who use it. After leaving his job at a major national law firm, he founded rradar to support organisations, helping them to understand business-related legal risk at any stage in their development and prevent things going wrong in the first place. Amongst these resources are online training, seminars, webinars, one-to-one calls, podcasts, an incident reporting app and – a world first – a virtual legal assistant called rradargrace, based on IBM Watson artificial intelligence technology.

Thanks to Gary’s leadership and vision, rradar has expanded at an incredible rate. Since 2013, turnover has risen by 695%. Employee numbers stand at over 100 at three offices and client numbers exceed 50,000. rradar has also secured 10-year exclusive global contracts to work with AXA and IBM, an industry first.

Tom Martin is the CEO and Founder of LawDroid, a chatbot development and consulting company to the legal industry. He’s been hired to create bots for lawyers and law firms to automate law practices and improve profitability.

Tom is a speaker and author on AI and bots in the legal industry. Tom has been a speaker at Clio Cloud Conference, LegalWeek, CodeX Stanford, Evolve Law and Thomson Reuter’s Emerging Legal Technology Roadshow.

LawDroid has been recognized for innovation by and received support from Facebook’s FbStart program, MaRS Venture Start program, and VentureLabs startup accelerator.

Born and raised in Los Angeles, California, Tom now lives in Vancouver, Canada with his wife and two daughters.