Netlaw Media, the organiser of Europe’s largest legal IT event, is to host the inaugural British Legal Technology Awards. The awards ceremony will take place at the prestigious Plaisterers’ Hall in London on 15th November 2017. The event is expected to bring together 300 dignitaries, nominees and guests in a celebration of exceptional achievement within the UK and European legal IT and cyber security sectors. 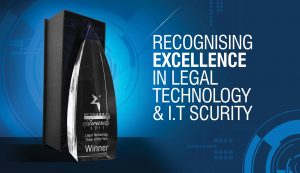 Nominations for the British Legal Technology Awards are open now and close on 11th September 2017. Finalists will be announced at Netlaw Media’s amalgamated London Law Expo and European Legal Security Forum, which will take place at the Old Billingsgate in London on 10th October 2017.

All awards will be evaluated by an independent panel of experts, chaired by Jacqueline de Rojas, President, techUK. The judging panel will also bestow a lifetime achievement award on an individual the panel concludes has been instrumental in driving the evolution and successful impact of technology within the legal services sector over the course of a long career.

Armstrong continues: “We’re especially delighted to have bought together a judging panel who, between them, have more than 150 years’ experience in the legal technology market, both as suppliers and consumers. Nominees can therefore assume that their awards submission will be subject to vigorous – but fair – scrutiny, and that the winners’ success will be richly deserved.”

Further details about the British Legal Technology Awards, including how to submit an entry, can be found at http://britishlegalitawards.com

Finalists for the British Legal Technology Awards will be announced during ‘The London Law Expo / European Legal Security Forum 2017 where 2,000 visitors are expected to attend the event on Tuesday, 10th October 2017.

‘The British Legal Technology Awards’ is an event by Netlaw Media. No other business, person or association other than Netlaw Media is involved in the construction, scheduling or staging of this event.