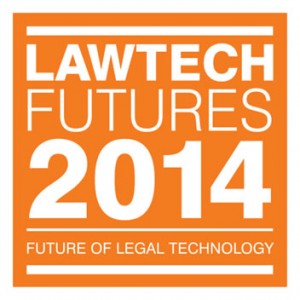 Following capacity sold out events in 2012 & 2013, the 3rd and final ‘LawTech Futures’ event was staged in London, United Kingdom on Tuesday 25th March 2014.

With LawTech Futures 2012 & 2013 reaching capacity sell outs weeks before the events took place, the final event in the LawTech Futures series attracted over 1,100 attendees and confirmed its position as Europe’s largest legal technology conference and exhibition.

As one of the world’s leading legal IT events, ‘LawTech Futures 2014 – The Future of Legal Technology’ offered three presentation stages including a 500 seat conference room.

With the Inventor of the World Wide Web, Sir Tim Berners-Lee conducting the Keynote Presentation, ‘LawTech Futures 2014’ continued to step aside from the traditional legal IT event structure by bringing together some of the most highly respected professionals from both the legal and commercial technology worlds to examine and explore the new range of systems, processes and platforms that will drive law firms and legal businesses into the next decade and beyond. 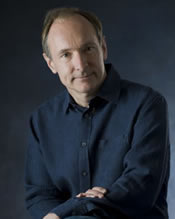 To compliment the high quality of presenters and panellists speaking at ‘LawTech Futures 2014’, Sir Tim Berners-Lee delivered the Keynote Presentation to a ‘standing room only’ audience on the Thomson Reuters Main Stage.

Sir Tim Berners-Lee is a pioneer and advocate of the Internet age, and is best known as the inventor of the World Wide Web.

Sir Tim is currently with the Computer Science and Artificial Intelligence Laboratory at MIT, he Directs the World Wide Web Consortium (a Web standards organisation) and is also a Director of the World Wide Web Foundation which funds and coordinates efforts to advance the potential of the Web to benefit humanity by creating programs that help give access to the Web often in developing countries. In addition, Sir Tim is also a Founding Director of the Web Science Trust, which promotes the multidisciplinary study of the web and its effects on society.

In 2001, Sir Tim became a Fellow of the Royal Society and is the recipient of many international awards including the Japan Prize, the Prince of Asturias Foundation Prize, the Millennium Technology Prize and Germany’s Die Quadriga Award.

In 2004, Sir Tim was knighted by H.M. Queen Elizabeth and in 2007 was awarded the Order of Merit (one of 22 living members bestowed as a personal gift of the Queen).

In 2009, Sir Tim was elected a foreign associate of the National Academy of Sciences, and in the same year, the UK Prime Minister Gordon Brown announced that Sir Tim Berners-Lee would work with the UK Government to help make data more open and accessible on the Web.

Having been ranked joint first in ‘The Telegraph’s list of 100 greatest living geniuses’, on the 18th March 2013, Sir Tim along with Vinton Cerf, Robert Kahn, Louis Pouzin and Marc Andreesen, was awarded the ‘Queen Elizabeth Prize for Engineering’ for ground-breaking innovation in engineering that has been of global benefit to humanity.