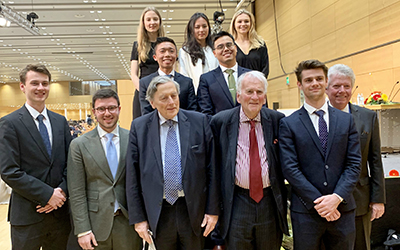 The Faculty is delighted to congratulate the team representing Cambridge University at the 26th Willem C. Vis Moot International Commercial Arbitration Moot Court Competition on reaching the Eighth Finals (round of 16) out of 372 participating Universities last week in Vienna, whilst also acquiring honourable mentions in all award categories.

The Vis Moot is regarded as one of the most prestigious international moot court competitions, and has been called the ‘Olympic Games of Moot Courts’ by the BBC.

This year the dispute arose in the context of an international sale of goods under the UNCITRAL Rules of Arbitration, the Vienna Convention on the International Sale of Goods, and the UNIDROIT Principles on International Commercial Contracts.

In addition, the team had a strong presence in the various Pre-Moots in which it took part. It won the Pre-Moot organised by White & Case in London with Glen Tay (Homerton) winning the best oralist award and William Moody (Clare) was awarded as best oralist in the Fox Williams & CIArb Pre-Moot.

The team is grateful for the strong support they received from both the Cambridge Law Faculty and Professor Brian Cheffins, as well as WilmerHale, and Franz Schwarz, who generously supported this year’s participation.

Finally, the team would like to extend its thanks to those who helped during the preparation of the written submissions and oral training of the team, in particular, to Professor Neil Andrews, Professor Richard Fentiman QC, Sir Christopher Clarke (Brick Court), Professor Anthony Daimsis (University of Ottawa), and Christopher Hancock QC (20 Essex Street).